Everybody's seen discarded cigarette butts in the street and not thought much of it - a tiny piece of trash. We've all also seen them on the beaches lining Lake Superior, but what do you think when you see that? Maybe that people shouldn't toss their butts on the beach?

But in most cases, that's not how the cigarette butts got there. They're actually the same ones from the streets and sidewalks, just days later, after they make their way through the stormwater system to the shores of Lake Superior.

There are groups of volunteers who clean up our beaches each spring and summer, and they report picking up thousands of cigarette butts on Marquette's beaches alone.

"Plastic pieces and cigarette butts are always the top two items found. Most of the litter actually comes from the city storm drains, which lead directly to Lake Superior," says Emily Leach at the Superior Watershed Partnership, which organizes several beach cleanups each year.

In fact, that's what happens to all trash and debris from our streets; any time it rains or the snow melts, all of that washes into the storm drains, and those empty from outflows that go directly to the lake. And it stays there, not only along the beach, but in the lake too.

That's not just a problem here, either. The international organization Ocean Conservancy lists cigarette butts as the top kind of trash they see in oceans, lakes, rivers and streams around the world. On their annual cleanup day last year, volunteers picked up more than 2 million cigarette butts from beaches, mostly brought there by stormwater systems. 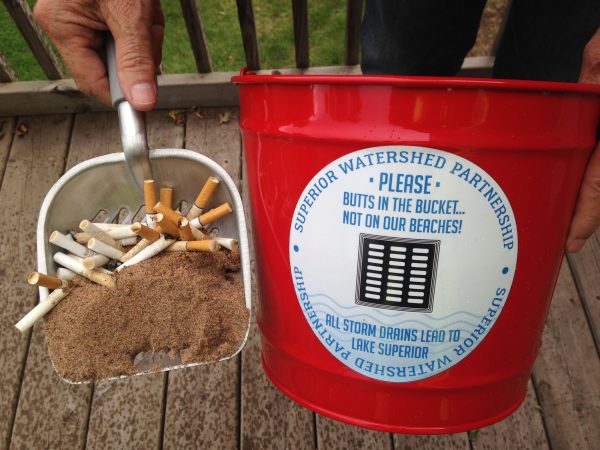 So, that leads us to another thing you might've seen around town: Those red metal pails of sand sitting near businesses, bars and restaurants in Marquette, Escanaba, Houghton and, more recently, Munising. As part of SWP's efforts to help improve water quality in Lake Superior and let smokers know what happens to butts they flick into the street, the red buckets made their debut back in 2009. Besides offering up a place to throw your cigarette or cigar butt that isn't the street, the red buckets also are labeled with information on keeping Lake Superior beaches clean.

This year, SWP has used some grant funding from the Marquette DDA and the Community Foundation of Marquette County (which also funded the original red buckets) to add some red smoker's pedestal style containers around town. The taller, more eye-catching pedestals' purpose is to continue educating smokers on not throwing butts on the ground.

The red bucket initiative has spread quickly, getting a nod at the EPA Great Lakes conference several years ago, and being shared as a model for other Great Lakes cities as an easy, low-cost way to keep cigarette waste out of the lakes.

Educational efforts have also been a big part of the push to reduce cigarette butt litter, and SWP has partnered in the past with the City of Marquette Police Department and the Marquette County Health Department to reach out to smokers. The police department concentrated efforts on littering awareness -- after all, tossing a butt on the ground is littering, a ticketable offense -- and the health department added resources to help smokers quit smoking, a double-barrelled positive that means fewer butts and better community health.

SWP has also distributed personal cigarette butt containers, to stash your butts in if you're not near a trash can or red bucket, at events for NMU students and for the public.

While the red buckets help smokers who are walking in downtown areas and frequenting city streets, there's another way cigarette butts end up in Lake Superior; by tossing them out your car window while driving. Yes, even when you're cruising along a highway or in a store parking lot, those butts will eventually end up in the storm drains, and, again, into the lake.

The solution? If you smoke or know people who do, make sure cigarette butts are properly disposed of - in the trash or in a red bucket or a smokers pedestal -- not on the ground, in the street or on the sidewalk. In the car, use an ashtray and then empty it into the trash later -- don't empty it onto a patch of ground or a parking lot.

It's simple - when someone throws a cigarette butt on the road or sidewalk in the U.P., it's going to end up in the Great Lakes. Finding ways to stop that from happening is an ongoing concern for everyone who lives on our beautiful lakes.