The Lake Superior Coastal Resiliency Project includes approximately 4,200 feet of shoreline adjacent to Lakeshore Boulevard and will create approximately 28 acres of public green space. The National Fish and Wildlife Foundation (NFWF) awarded a $2.5 million coastal resiliency grant to the Superior Watershed Partnership (SWP) to assist the City of Marquette in restoring almost a mile of severely eroding Lake Superior shoreline within the city limits. Project activities will control coastal erosion and restore or enhance numerous natural features including but not limited to coastal floodplain, sand beach, dune and swale, coastal wetlands and a variety of terrestrial wildlife and bird habitats. During the three year project implementation timeline the City of Marquette will also coordinate the reconstruction of Lakeshore Boulevard; moving the road approximately 300 feet inland. The completed project will also include an extensive hiking-biking trail system with parking and ADA public access. The project also includes innovative design features developed by the City of Marquette Engineering Department including green infrastructure practices to insure cleaner stormwater runoff from the roadway and parking areas.

Due to more frequent and more intense storm events and the risk to public safety the City of Marquette has been forced to close a large portion of Lakeshore Boulevard for extended periods of time. Recent extreme weather has included record-setting rain events, recurring road flooding, wave and storm surge impacts and threats to public safety. During a storm in October of 2017 buoys documented record 28-foot waves offshore from Marquette. During that same storm Lakeshore Boulevard sustained extensive damage and two people drowned attempting to view the waves at nearby Presque Isle Park.

The SWP is a regional leader in assisting UP residents and communities with energy conservation and climate adaptation.

Hundreds of homeowners and many local businesses have benefited from SWP energy conservation and alternative energy programs including a unique program that installs solar panels for qualifying low-income families.

The SWP solar initiative promotes solar at all income levels and encourages long-term energy affordability to offset energy costs and improve the overall efficiency of residential homes and small businesses.

By highlighting these solar demonstration sites, the SWP solar initiative strives to promote energy literacy throughout community members and leaders in the Upper Peninsula and Great Lakes region.

The SWP works with UP communities to foster regional cooperation in climate change adaptation planning and mitigation efforts. The SWP was integral in forming the Marquette County Climate Adaptation Task Force (CATF) a regional climate task force that includes the City of Marquette, Marquette County, local businesses, and representatives from Northern Michigan University. In addition, the SWP works with coastal communities across the UP (Lake Superior, Lake Michigan, and Lake Huron) to plan and implement small scale and large scale climate adaptation and mitigation projects to protect critical infrastructure and increase the resiliency of the shoreline to withstand more frequent and intense storms. 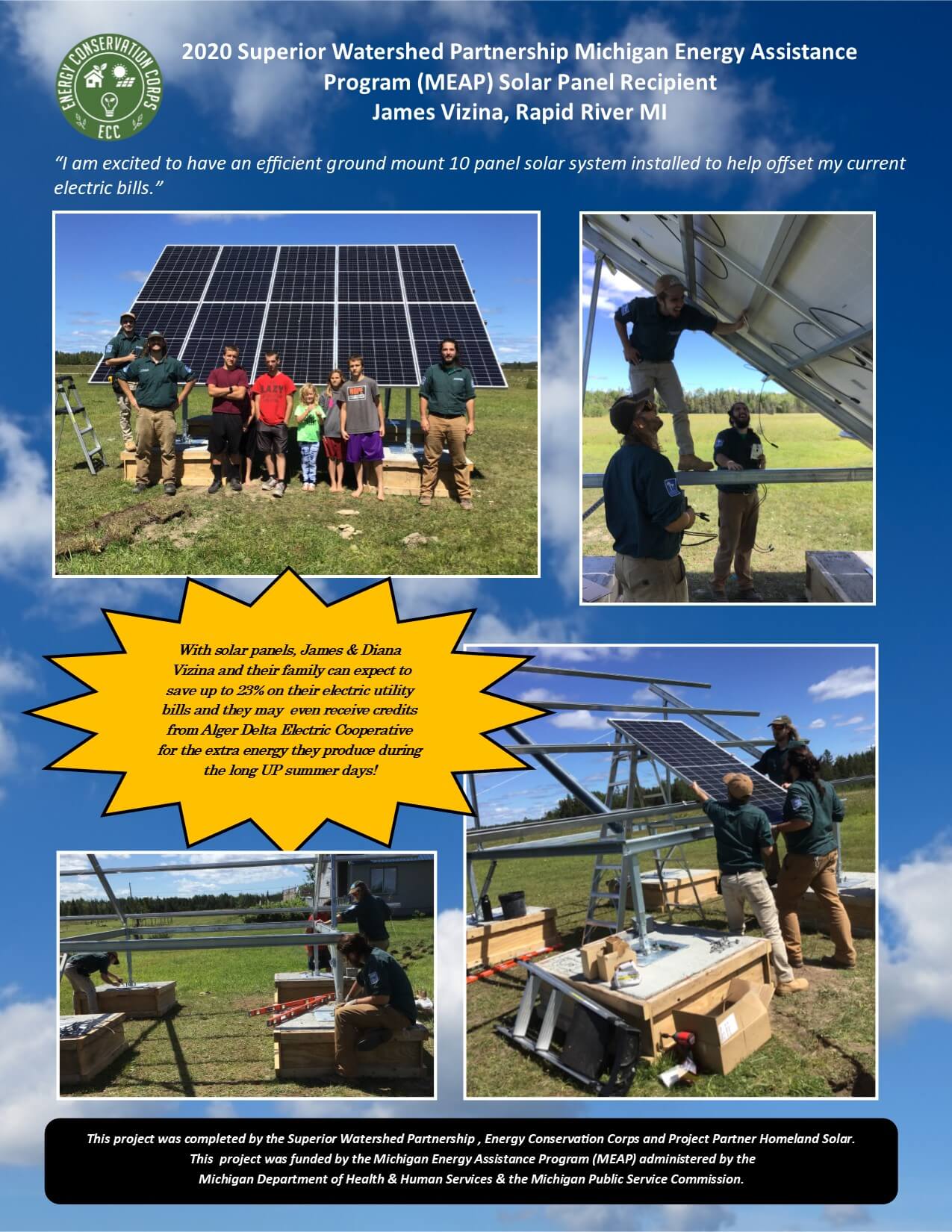 "I am excited to have an efficient ground mount 10 panel solar system installed to help offset my current electric bills." 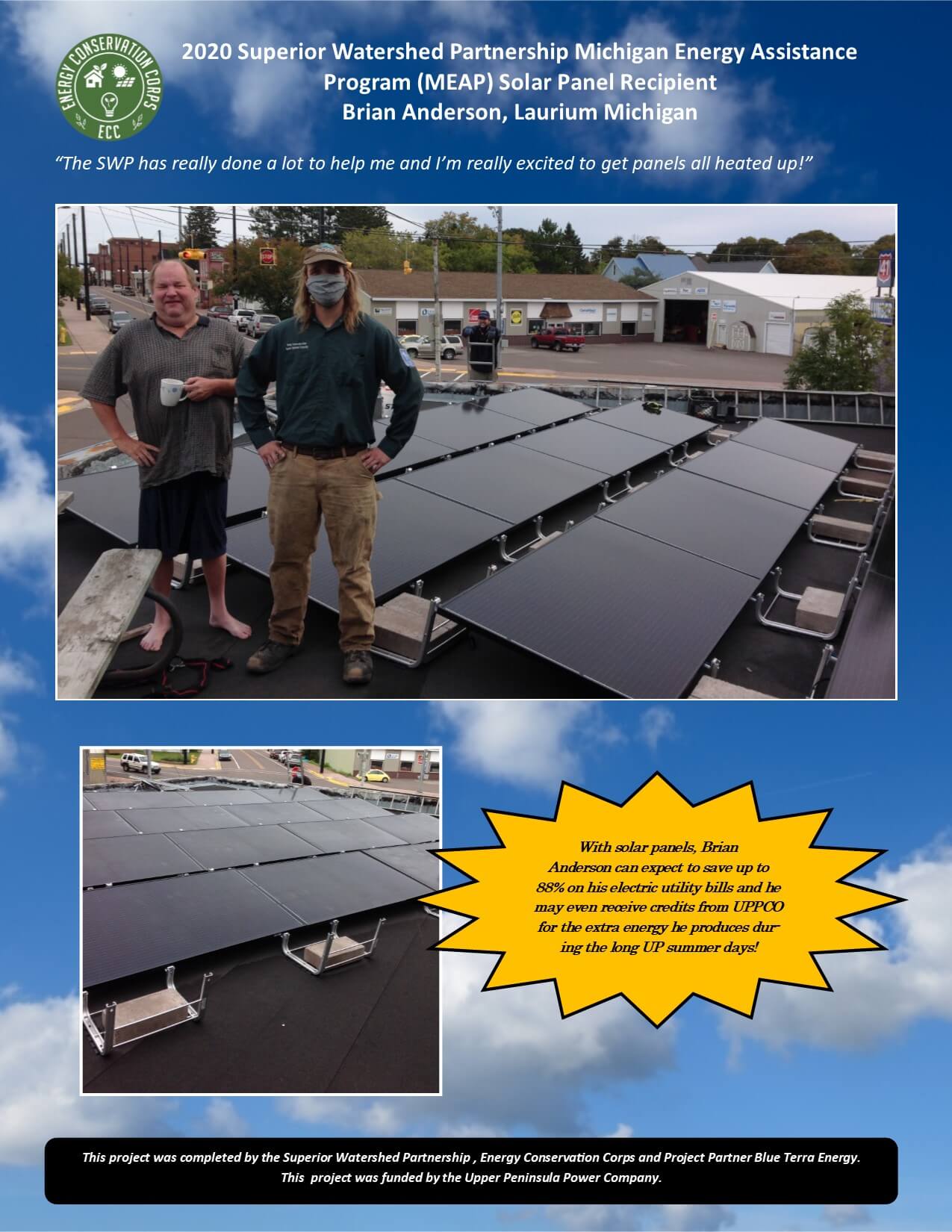 "The SWP has really done a lot to help me and I’m really excited to get panels all heated up!" 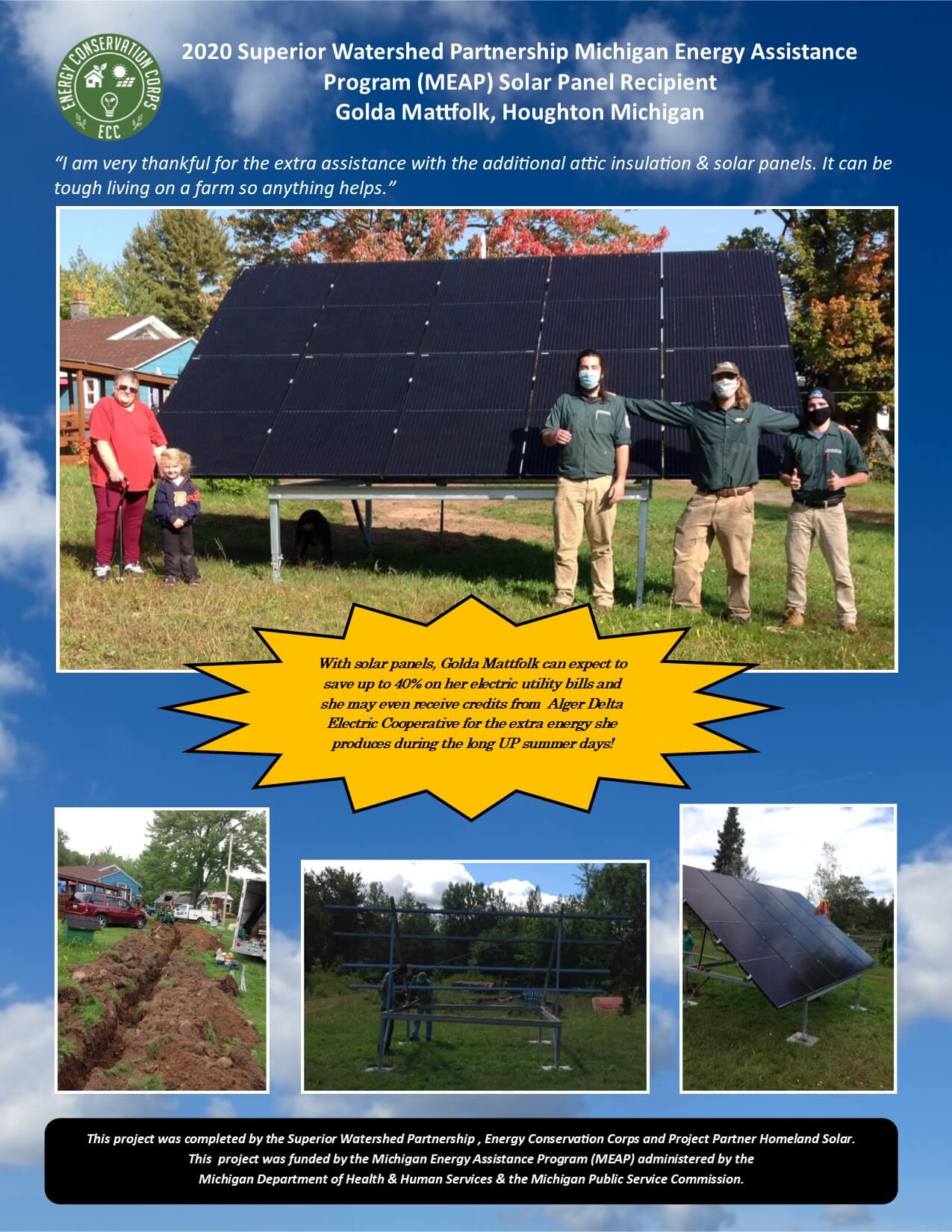 "I am very thankful for the extra assistance with the additional attic insulation & solar panels. It can be tough living on a farm so anything helps." 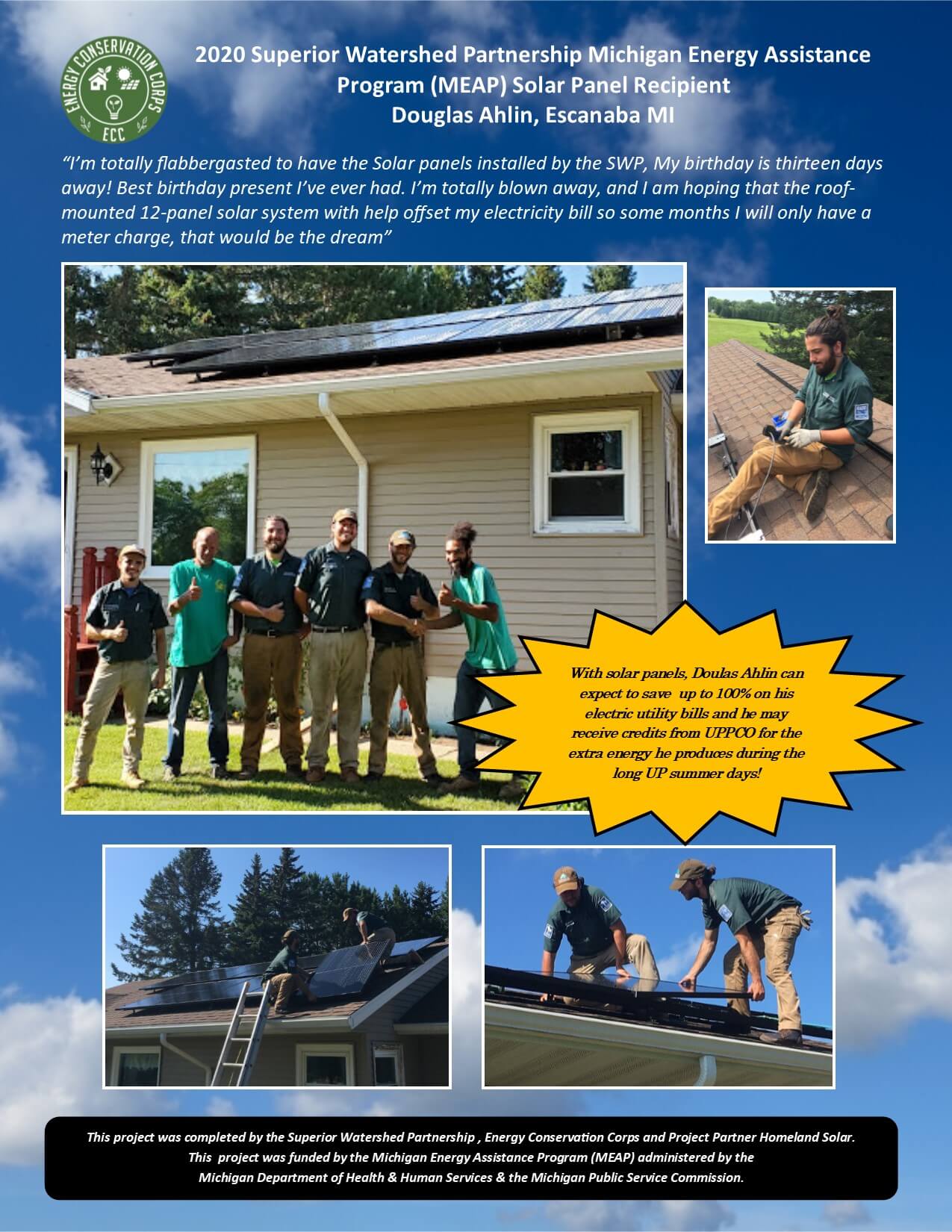 "I’m totally flabbergasted to have the Solar panels installed by the SWP, My birthday is thirteen days away! Best birthday present I’ve ever had. I’m totally blown away, and I am hoping that the roof-mounted 12-panel solar system will help offset my electricity bill so some months I will only have a meter charge, that would be the dream." 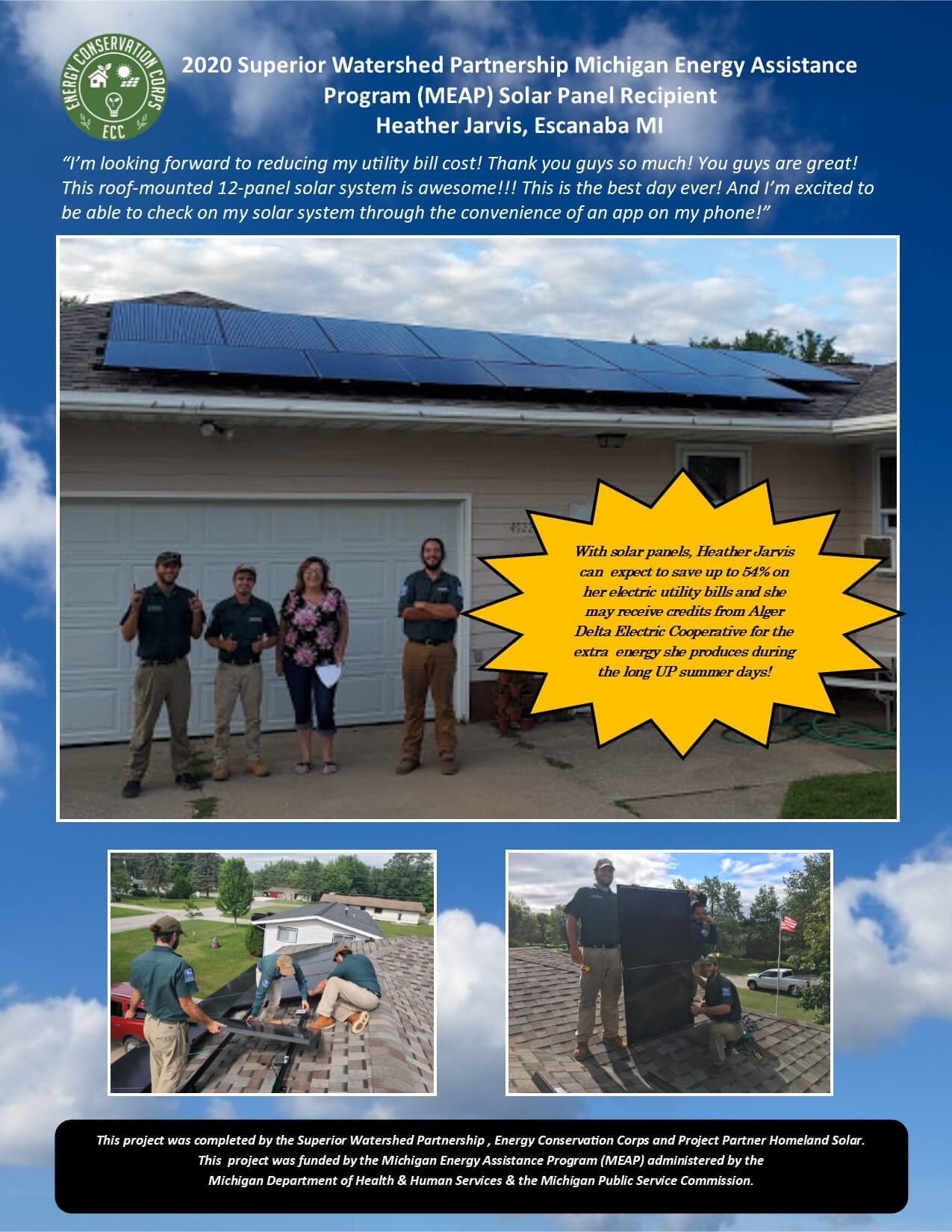 "I’m looking forward to reducing my utility bill cost! Thank you guys so much! You guys are great! This roof-mounted 12-panel solar system is awesome!!! This is the best day ever! And I’m excited to be able to check on my solar system through the convenience of an app on my phone!" 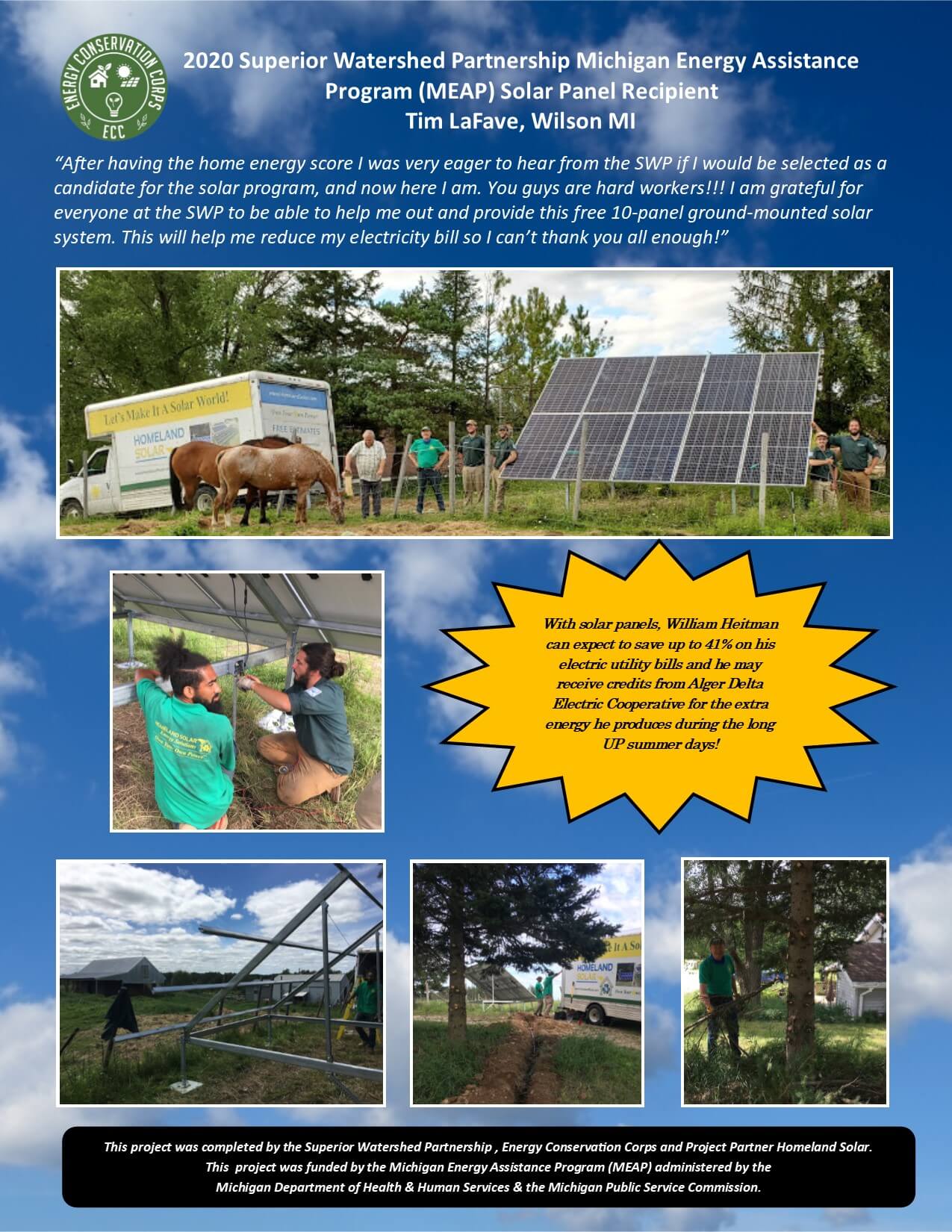 "After having the home energy score I was very eager to hear from the SWP if I would be selected as a candidate for the solar program, and now here I am. You guys are hard workers!!! I am grateful for everyone at the SWP to be able to help me out and provide this free 10-panel ground-mounted solar system. This will help me reduce my electricity bill so I can’t thank you all enough!" 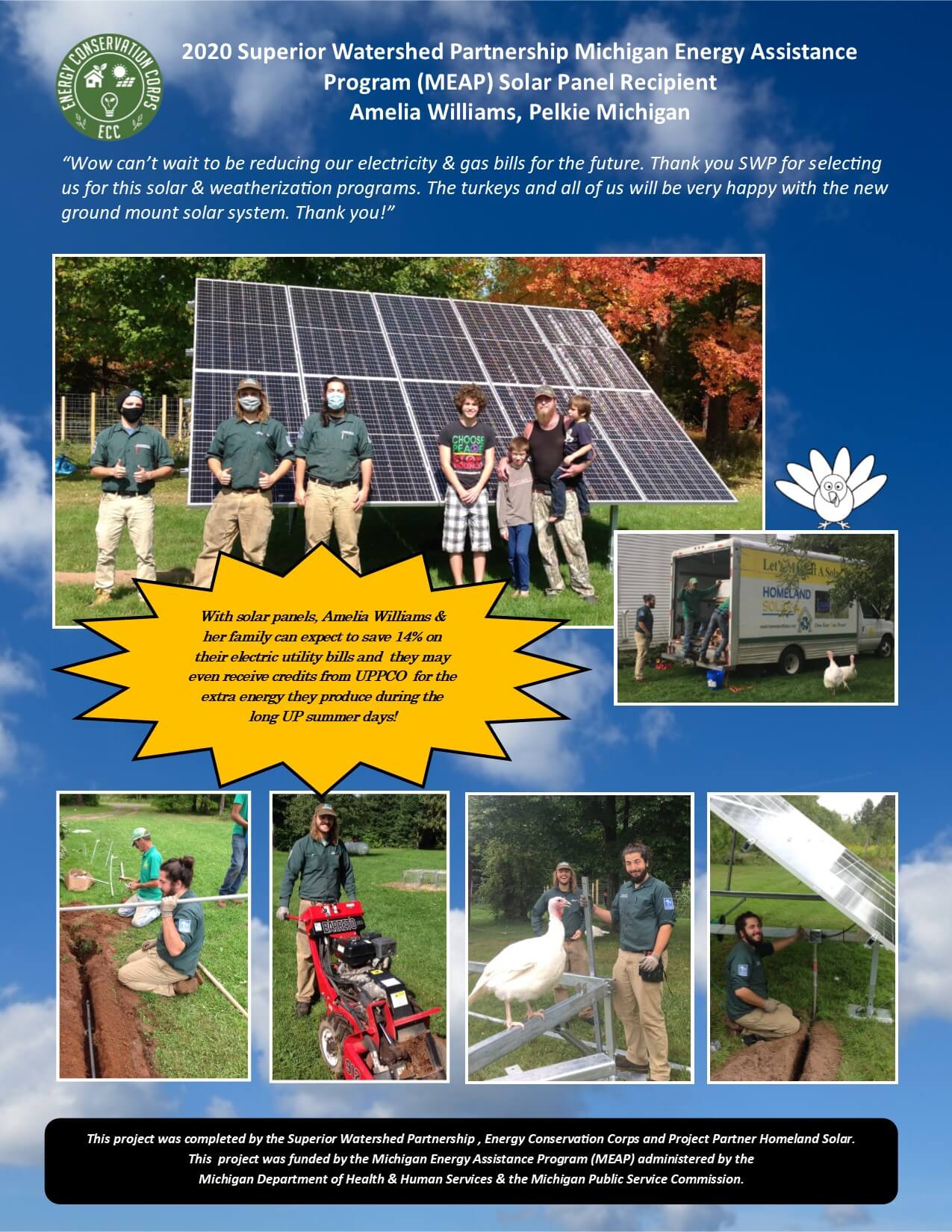 "Wow can’t wait to be reducing our electricity & gas bills for the future. Thank you SWP for selecting us for this solar & weatherization programs. The turkeys and all of us will be very happy with the new ground mount solar system. Thank You" 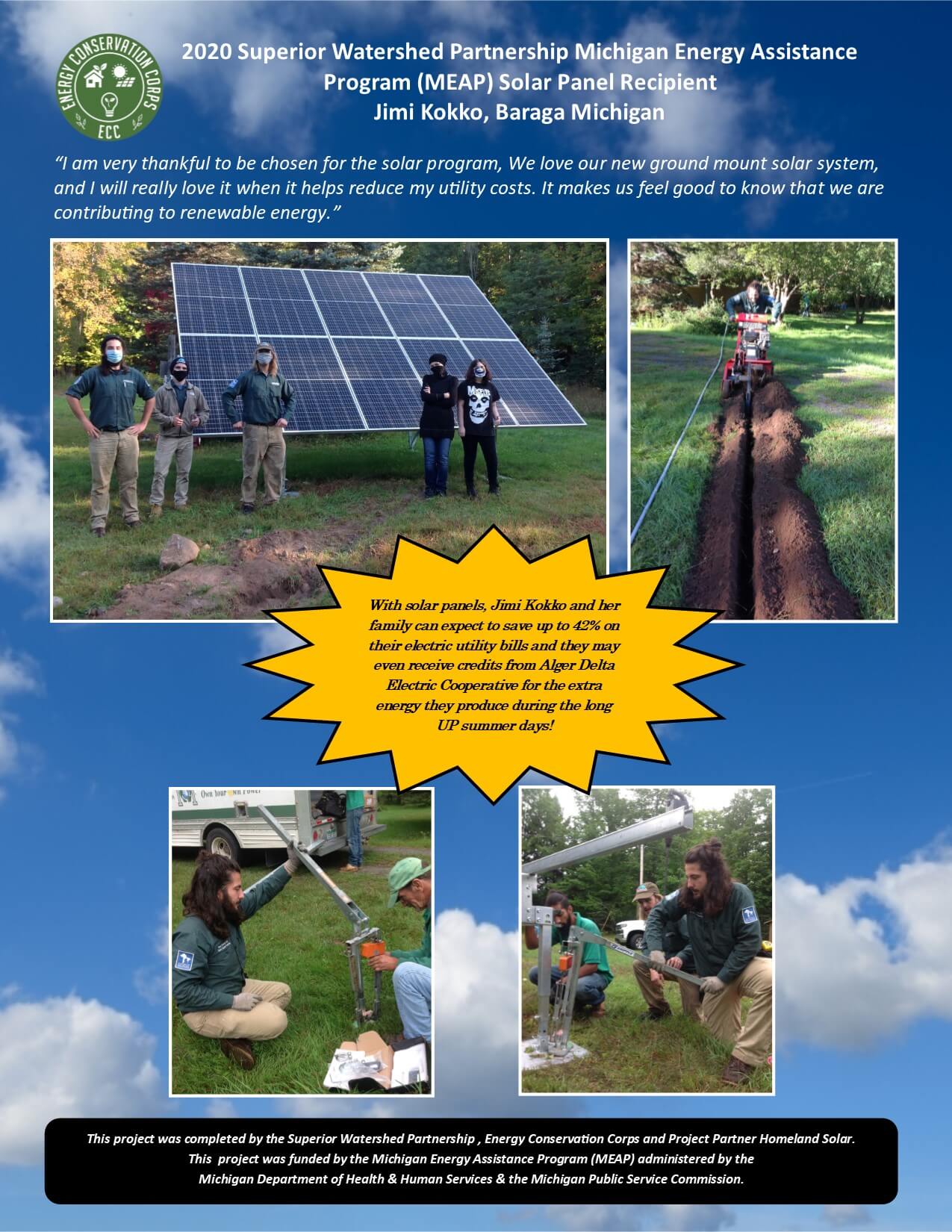 "I am very thankful to be chosen for the solar program. We love our new ground mount solar system, and I will really love it when it helps reduce my utility costs. It makes us feel good to know that we are contributing to renewable energy." 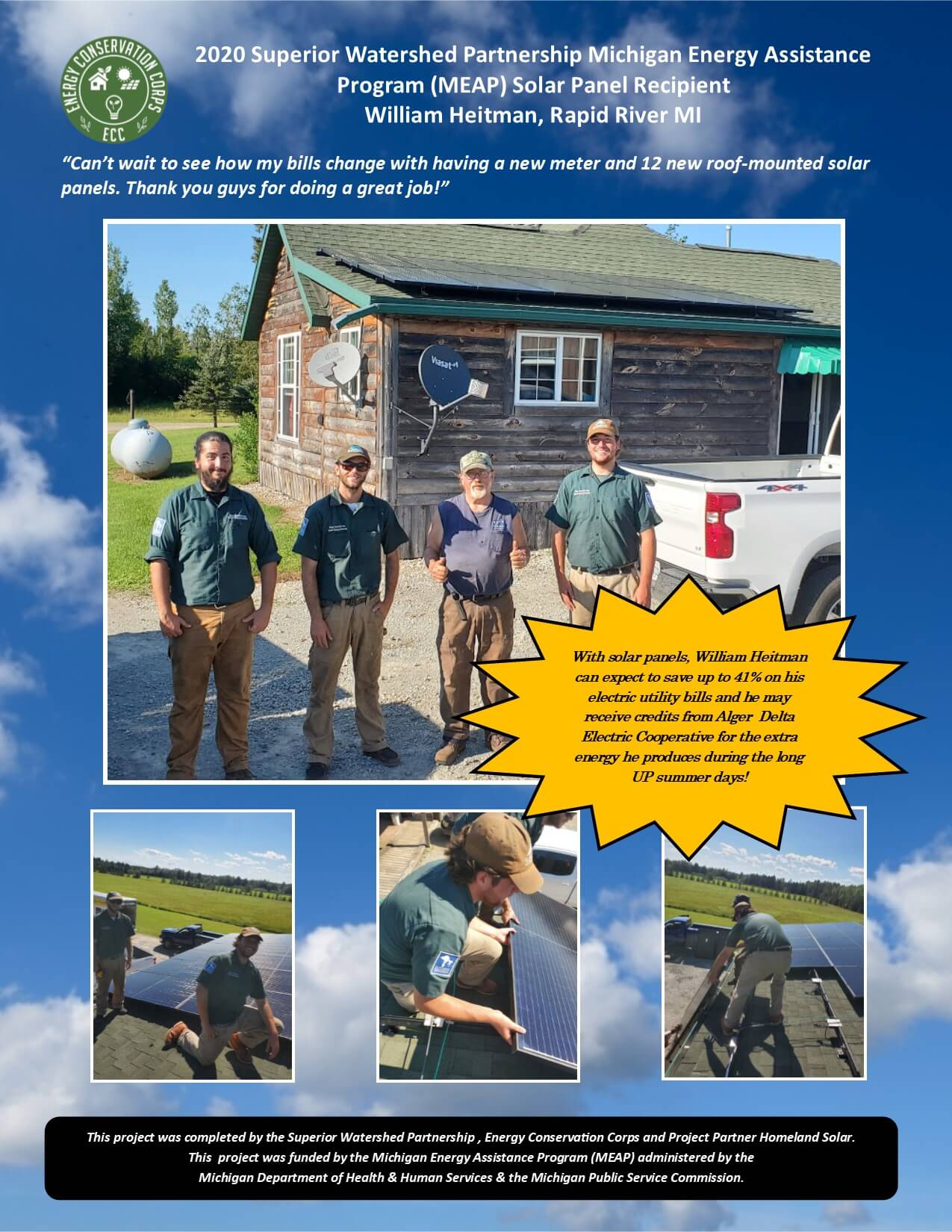 "Can’t wait to see how many bills change with having a new meter and 12 new roof-mounted solar panels. Thank you guys for doing a great job!" 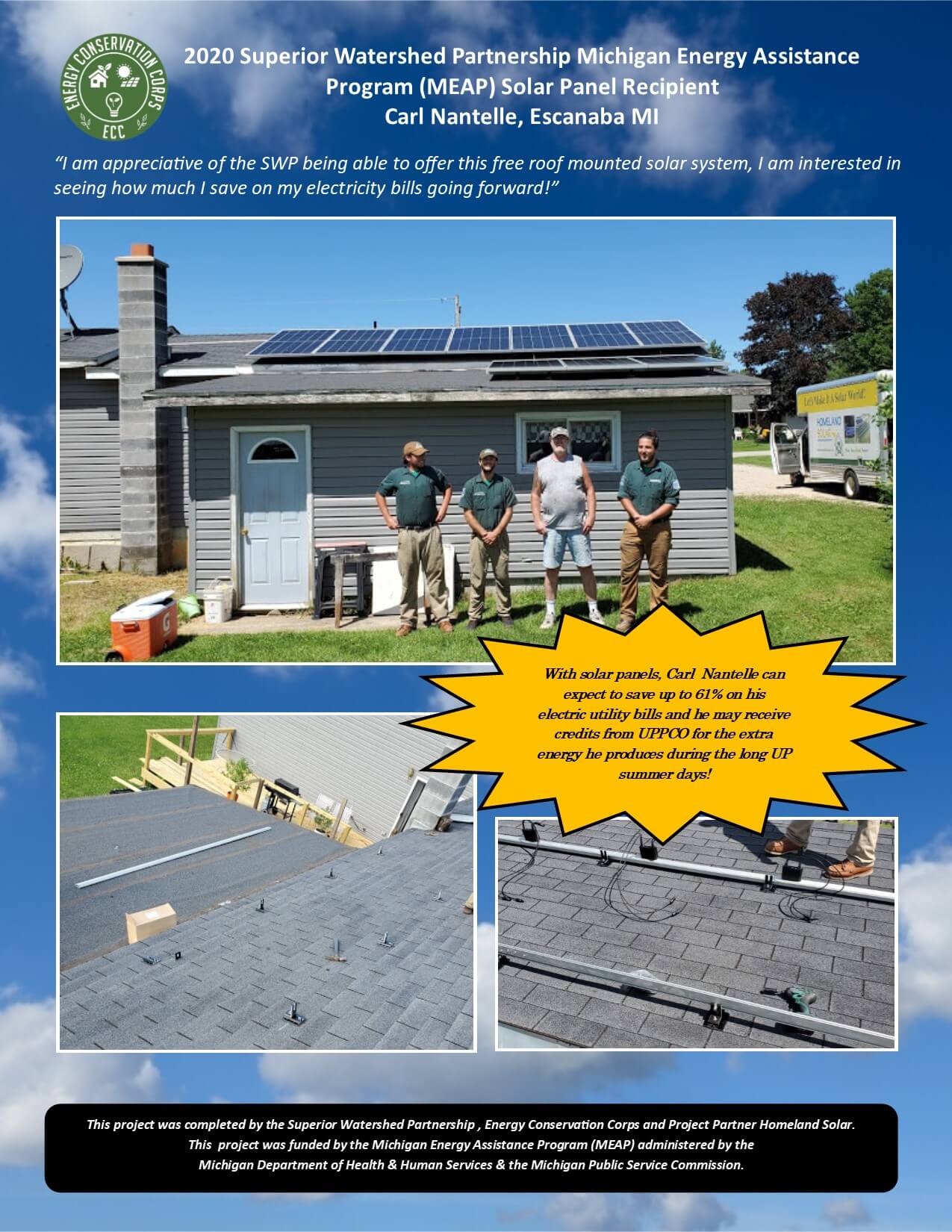 "I am appreciative of the SWP being able to offer this free roof mounted solar system, I am interested in seeing how much I save on my electricity bills going forward!"